The History of Dive Watches Part 1

In our historical perspective column we aim to educate our readers to some of the history surrounding wristwatches or particular features of wristwatches. It is an important part of understanding watch brands and appreciation as much to do with the Swiss industry is steeped in deep history.

I remember, that at the start of my journey of watch appreciation, the history of dive watches was one of the first things that captivated me into a deeper appreciation of horology. The more I read, the more I understood how many of the small design features actually had clever functional purposes which today we just simply take for granted. Somewhere, we just forgot.

Foxhunting was a very popular pastime amongst gentleman

It is hard to believe that the expensive wristwatches that we wear on our wrist today were actually born out of necessity and function rather than luxury. Originally, people had large clocks in their home which simply told the time. These transitioned to smaller clocks that meant they could be positioned in different places at home before evolving into even smaller devices called pocket watches to allow gentlemen to know the time while they were on their hunts.

Wristwatches were actually first popular with women and formed part of their jewellery, however due to the First World War, wristwatches came to prominence as sadly, they were used to coordinate military strikes to the correct time.

World War 1 was when wristwatches came to prominence

It was clear early on, that their success on the battlefield would be limited unless their reliability problems due to water, humidity and dust could be overcome. You may find that unbelievable but yes, there was a time when watches were very susceptible to the environment. Watches were mechanical, requiring metal parts to work in tandem – there simply were no batteries and therefore dust and water could easily find their way in the case and disrupt the components, affect the lubricants, lock the gears etc.

It is worth taking some time out at this stage to mention the engineers of this period. The ideas which they came up, many of them ingenious, ultimately created revolutionary solutions which have served to keep watches running through decades, utilising designs that we often rely on even today.

Rolex Hermetic showing a case within a case

The first problem that was the most evident was resistance to water. The obvious solution was to seal the watch inside an external case, similar to locking a watch into a jar with a screw top. This protected everything but with two flaws, one of which was simply too big to ignore.

The first flaw was that this meant the the whole watch ended up being quite large and the second more significant flaw was that every time the hand wound movement had to be rewound or the time needed to be set, it has to be removed and then put back into the external case again. Automatic (self winding) watches had yet to be invented, hence repeated and frequent use simply wore the case out quickly necessitating repairs. It was therefore apparent that the future of these cases was somewhat limited. Therefore engineers had to come up with a more practical, more durable solution.

The first to try was Francois Borgel, a Genevan maser case maker who filed two patents, in 1891 and 1903 for two slightly different watch cases consisting of threaded parts within the watch case. The major upside was that the external case was done away with and yet there was a good seal achieved. The mechanism worked by using a threaded ring that would go around the movement and bezel to which the casebook would be attached to.

Brands such as IWC and Longines used the Borgel cases for some of their watches, but another major issue still remained. Due to the crown not being able to be sealed, humidity and fine dust could still find its way into the movement, albeit now at a slower rate, thanks to the threaded case design. 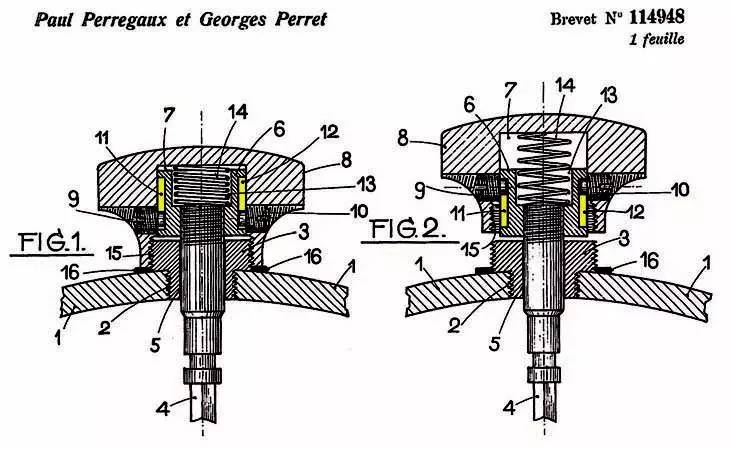 The original idea and the first patent to be applied in October 1925 for a waterproof screw down crown were Paul Perregaux and Georges Perret, however it was far from the finished article. Again there were two flaws. First of all, unwinding the crown was the same was you use to wind the watch and therefore once you set everything and were ready to go, the watch could not be unscrewed again until the watch the main hairspring had unwound a little. Secondly, the materials used to create the seal around the crown were placed externally and were made of flimsy materials such as cork, leather or felt which meant they quickly lost their sealing properties and had to be  replaced. At the time manufacturing abilities meant these were the only materials that could be used. It is unbelievable that we are only talking less than a century ago. 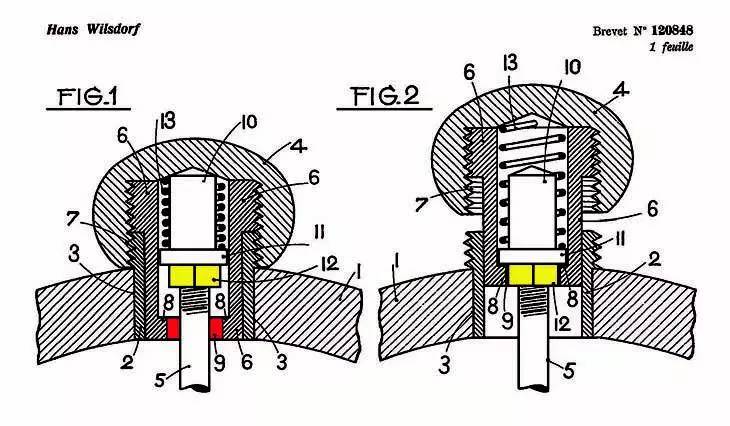 Paving the way to the first waterproof wristwatch that was practical and reliable was non other than Hans Wilsdorf – the founder of Rolex. He realised that by combining the threaded case designs with the threaded crown one could truly have the first waterproof wristwatch. In 1927, having purchased the rights from the Swiss inventors and with an additional year of development, he submitted his own patent for a screw down crown. Known as patent CH 120848, it was one of the truly breakthrough patents to have ever been filed in watchmaking history.

The engineers at Rolex and at C.R. Spillman SA (the case suppliers for Rolex at the time) first of all moved the crown seal that had been external, into the crown tube, which enhanced its reliability and durability. Secondly, they found a way to wind the watch independent of when the crown was unscrewed – by engaging the movement only once the crown has been fully pulled out.

As mentioned in my earlier article, the Rolex Oyster, the first proper reliable and durable water resistant watch was subsequently invented and was gained headlines news in the Daily Mail when Mercedes Gleitz wore the watch around a necklace as she swam across the English Channel. However, I rather elaborated on the story at the time due to the article’s needs but here I have an opportunity to tell the story in rather more interesting detail.

When young Mercedes swam across the English Channel with the Rolex Oyster around her neck, it was in fact the second time she had performed this feat. The reason as to why she performed it twice is because some other young lady has also performed the feat after her, and had not only  succeeded but bettered her time by two hours.

However, it soon turned out that the young lady who claimed to had bettered Mercedes’ time actually turned out to be a fraud, and soon the media started to question whether Mercedes’ feat was also a fabrication. So she decided to perform the feat again to prove the doubters wrong.

Most Rolex fans know about as much as that. However, there is still one small twist left to tell. When she performed the second attempt to swim across the English Channel – she didn’t actually make it all the way across. However, her story and her watch were by this time front page news and Hans Wilsdorf, the shrewd businessman he was, highlighted the English Channel swimming feat by arranging with retailers for the Rolex Oyster to be showcased in the shop windows in a fish tank full of water.

Rolex had finally announced itself to the world – and with some style.